Madam President, Members of the Board and beloved members of our Association.

As historian I am happy to give you a short history of our extraordinary Rotary Women’s Association (Auxiliary).

I brought along some of our history books, albums and a copy of the original minutes from 1921, and hope you will take time to have a look at these precious newspaper clippings and letters from long ago. In the early days we were given a great deal of publicity as our ladies showed up on
the social pages of our newspapers.

It was a rather interesting and unusual beginning – making pajamas for TB patients at the newly opened Rotary Clinic.

In 1919 the wives of the Rotary Club of Vancouver were requested to assist with the work of the newly opened Rotary Clinic for Chest Diseases which was located in West Point Grey in those days. What we would call a Sanitarium today. The ladies established a sewing centre at the Clinic and met weekly to make pajamas and other garments for TB patients. The ladies raised money to purchase three (3) sewing machines. They also provided Christmas cheer for the children of the TB families.

The wage earner was often bed-ridden and, with little welfare in those days, the Rotary Club and RWA members found themselves buying food, clothing, bedding and fuel, and sometimes paying rent for these poor families in need.
In 1921 the “Women’s Auxiliary to the Rotary Clinic for Chest Diseases” was formally established. Dr. Malcolm McEachern, head of the General Hospital acted as Chairman of the inaugural meeting. Only wives and daughters of Rotarians were invited to be members.

By 1922, 1,000 garments had been completed. To raise the required money dances at Lester Court, a New Years Frolic, bridge parties and golf tournaments were held. They made $2,450.00 and spent it all bringing sunshine to many homes.

By 1928 Vancouver was growing and so was the Auxiliary. Khaki uniforms were made for the children at summer camp, sponsored by the Rotary Club. Money was still not too hard to make and everyone was singing, “There’s a Rainbow round by Shoulder”. Then for the next few years more and
more calls were being made for Social Services and Vancouver was feeling the effects of the Stock Market Crash – it was 1929.

Our social services became very busy distributing food and visiting the sick and the poor. It was the Depression. Tea was selling for 30 cents a lb. Sirloin – 22 cents a pound, and butter was three pounds for 57 cents.

In 1940 Canadian troops were landing in Britain. The Auxiliary set up machinery for war work. A Red Cross Unit was formed meeting every Thursday, turning out sheets, clothing, bathrobes, overcoats, and lots of knitting. This work carried on until 1945. Margaret Dennison was awarded the Red Cross Medal in recognition of the work done by the Unit.

A United Services Centre was set up by the Rotary Club of Vancouver and was used as a recreation centre for men and women in the Armed forces on leave in Vancouver. The Rotary Ann’s (as we were called at that time) helped at the Centre as hostesses in the library, cloakrooms, and canteen. They worked long hours, as it was extremely busy serving 1,000 meals a day. The workers dressed in white and always looked crisp and fresh. The food was attractively served and very reasonably priced. Games, billiards, ping pong, and dancing place in the evenings – to say nothing of the Wurlitzer which could fill your ears with music any hour of the day, along with a player piano.

The United Services Centre served over 1,000,000 service men and women who enjoyed its hospitality and recreation. In May 1945 Princess Alice visited the Unit and was greatly impressed with the work being done by our volunteers. After the war the building was turned over to the New
Veterans Branch of the Canadian Legion.

I joined the Auxiliary in 1953, 55 years ago, and was invited to a “new members” garden party being held in the Shaughnessy home of one of the members. May Downie was my “big sister” and she was always there to greet me at the luncheons. I was a young mother with 3 children, no baby sitter,
but the Rotary Ladies brought me pillowslips and tea towels to embroider at home for the bazaar.

As soon as my children were a all in school, I attended the luncheons and immediately became the treasurer and membership chair. They were together in those days so I was busy enough!

In the post war period tuberculosis was no longer a major concern and social services were largely take over by government agencies.
The RWA charitable projects continued and in 1953 layettes were sewn and given to the Vancouver Health Department. Our ladies today are still packaging layettes, hundreds of them. They don’t have to go to the sewing room to make nighties and jackets but they are still knitting bonnets.

The layettes are beautiful and a work of art. In the 1950’s bridge parties started meeting in members homes with a windup at the end of
June. Bursaries were awarded to outstanding students and a camperships program was started for disadvantaged children.

I also recall us purchasing a typewriter and vacuum cleaner for the Crisis Centre. We also gave a lot of assistance to the Emily Murphy home in North Vancouver where abused women and children were helped and kept away from the abusers.

In the 1960’s bazaars and rummage sales were a reliable source of funds and in the 1970’s another fundraiser was the sale of Ice Capades Programs in association with the Rotary Club of Vancouver, – this continued well into the 1990’s.

In 1981, sixty years of service and fellowship were celebrated with the publication of a cookbook. The RWA Anniversary Fund was established in 1985 whose capital came from cookbook profits, the Hattie Dixie memorial and further bequests. Interest from this fund is used annually for a
selected purpose at the discretion of 3 trustees and the membership

In 1981 our 60th year, our first Anniversary Dinner was a potluck dinner and celebrated at Haro Park Lodge, using the recipes from our cookbook. Our husbands were invited and the party was a happy success.

In 1983 the RWA was registered under the Societies Act and officially changed its name to the RWA Inner Circle Society, but the familiar Rotary Women’s Auxiliary continued to be used. The reason we could not register under the name “Rotary” was because Rotary International would not
allow us to use their name, so we shortened it and are commonly known at “Rotary Women’s Auxiliary”.

To date the RWA Inner Circle Society has raised and spent close to $700,000.00 on community service, assisting mostly mothers, children, students and adults who were sexually abused as children, and many others. Some also went to research in genetic diseases and breast cancer to name a few.
$30,000.00 has been raised this year and will be used for all our charities. “Assistance goes directly to those who need it”.

The main source of funding are now a Direct Access Grant from the B.C. Gaming Commission, a spring fashion show, a Valentine Daffodil Auction held in February and the odd raffle – all thanks to Suzanna Verkerk, our Ways and Means Director.

Fellowship is a great part of our organization as well as our many charitable endeavours. We have enjoyed many years of fellowship with our monthly luncheon meetings having met in many different venues, from the TB Clinic in West Point Grey, the Delar Restaurant on Granville St. the
Jewish Community Centre, the Bayshore Hotel, the Vancouver Hotel, Georgia Hotel, the Haro Park Lodge, and our present location where we are so privileged to be able to enjoy the mountains, the sea, great food and service at the Royal Vancouver Yacht Club.
This is our 87th year and I have a feeling you will be celebrating your 100th Anniversary in 13 years. I’ll be 99 and I’m planning on being their so “Keep it Up Ladies”.

One more thing – I have been making a new will (everyone should have one) and I told my lawyer I wanted to leave a bequest for the RWA Anniversary Fund. He said, “Do it now, it will save your probate fees” so I take great pleasure in presenting it to-day to our treasurer. 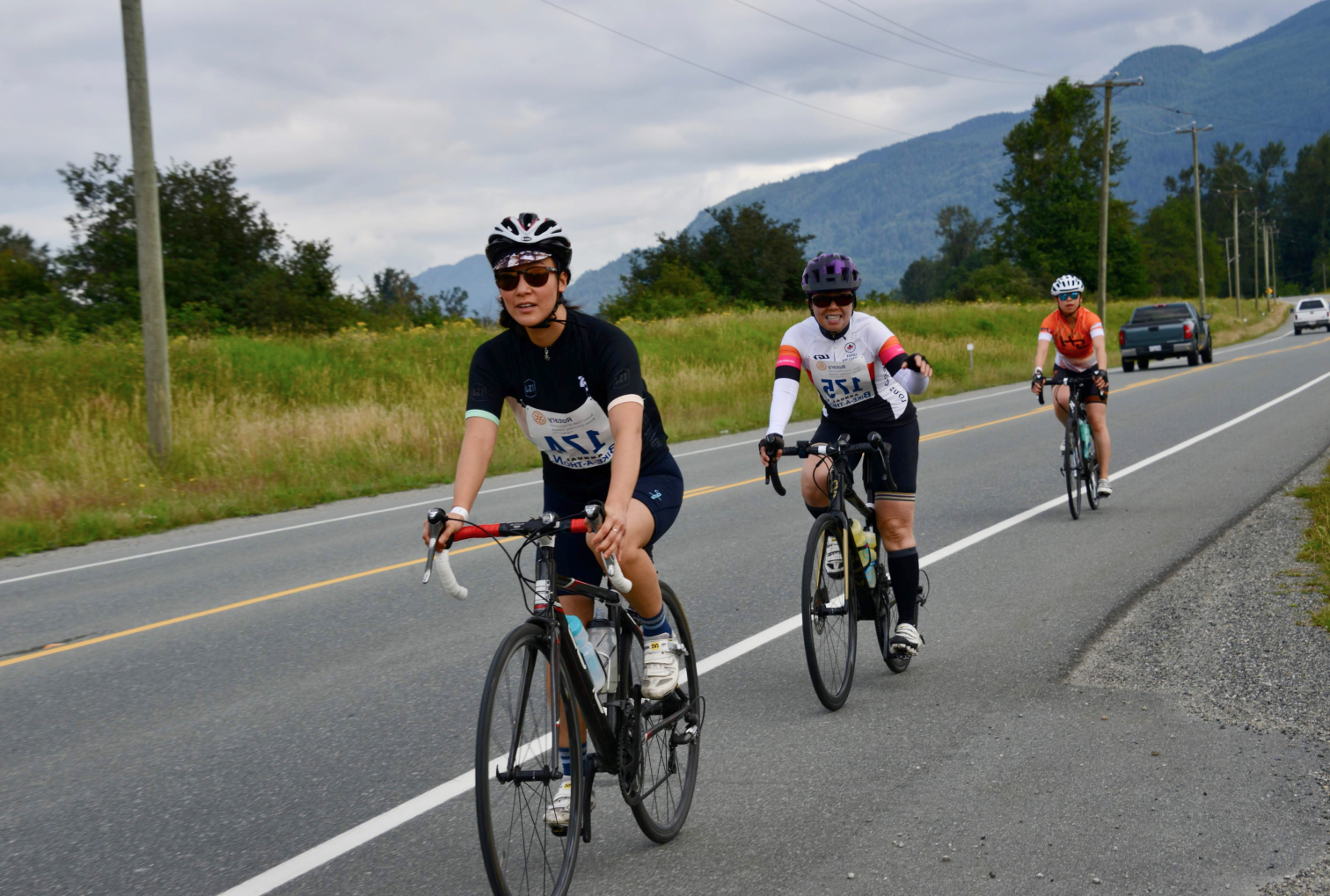